Former and current members of the Harvest Youth Board pose for a photo after the Thanksgiving Eve Dinner.

More than 1,700 area residents enjoyed an early Thanksgiving dinner — turkey, ham and all the fixings — courtesy of The Harvest Youth Board.

Youth Board members, past members and volunteers served 1,704 meals, including an estimated 322 to people who ate in the Martinsville High School cafeteria, between 2 and 5 p.m. Wednesday.

Youth Board members hope the Thanksgiving Eve Dinner will be continued in the future by their successors to become a “signature” board event.

“It exceeded my expectations,” said former board chairperson Paulina Vazquez, who returned home from the University of Virginia to help with the dinner.

She was pleased that the event served so many people yet had no obstacles or “hiccups” that could not be overcome. “It feels great serving the community,” she added.

Vazquez was one of five former board members who returned home for the event that first was envisioned last fall, too late to plan an event of that magnitude for Thanksgiving 2015. So, they spent the past year training and planning for Wednesday’s dinner.

As the crowd thinned out late Wednesday afternoon, past and present board members and dozens of volunteers beamed with the satisfaction of a job well-done.

Youth Board Secretary Kendall Cope said the highlight of the dinner for him was helping a woman who was disabled and could not get out of her car to go into the cafeteria to get a dinner.

“She said she used to cook big meals for the community. It was a highlight for me that we could do something for her,” Cope said. 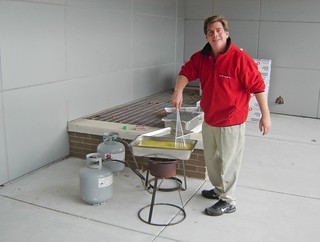 Scott Norman (pictured at left), who organizes the Richard’s Dinner community meal held each Christmas, spearheaded the cooking that began Tuesday morning. Six cooks and numerous helpers prepared about 430 pounds of turkey (about 40 turkey breasts) and 387 pounds of ham, along with 10 six-can cases of green beans, dressing, gravy, cranberry sauce, rolls and desserts. Leftover cooked food was donated to the Salvation Army.

“It’s a community effort,” Norman said as he boiled water to prepare mashed potatoes. “It wouldn’t work without everybody” pitching in.

“The kids were amazing. They’ll do whatever they’re asked with a smile,” he added.

When the dinner was put off last fall, several Youth Board members volunteered with Richard’s Dinner to learn how to run such an event. Now, Norman said, they are able to do it themselves, something he did not master until he was much older.

Norman said he gets a “happy heart” from his involvement in the dinners. In addition, he said, when you start with one dinner on one day a year — Christmas — and then add a second dinner on a second day — Thanksgiving — more people benefit.

“If everybody does a little part,” the community’s needs would be met,” he added.

Inside the cafeteria, dozens of volunteers — most of them teens from throughout the area — operated two serving lines to fill hundreds of carryout containers with the Thanksgiving meals. Dinner rolls and cups of cranberry sauce were added before the servers headed to a long line of tables holding about 1,500 store-bought and homemade desserts, according to Allyson Rothrock, president of The Harvest Foundation. She made a grocery store run that morning to fill out the dessert table.

“It was a huge success, and I’m so proud of those young people,” she said Wednesday night. She noted that the youth interacted well with people who came in for a meal as well as with each other.

They were eager to work and to provide “a service to the people of the community, and it came from the heart.” - Allyson Rothrock

“I didn’t realize how much recruiting the Youth Board did of their peers (to volunteer at the dinner). I also am very encouraged by the number of parents who came to (volunteer and) support their children. I’m thrilled to see them wanting to give back at a time when we all need to be thankful,” Rothrock said.

Sophia Kelly volunteered because her niece, Kristel Hairston, is treasurer of the Youth Board.

“I love helping people. I want to do whatever I can,” Kelly said in between calling out numbers and cajoling drivers to pick up bags of meals for deliveries. “It’s a joy to know someone will get to eat today” who might not otherwise have a meal.

Heidi Pinkston was there to help her son, Max, chairperson of the Youth Board, as well as the community. As she waited in the serving line, she said board members — including her son — were nervous about the event beforehand.

“I’m so proud of all of them. They’ve worked so hard,” Pinkston added.

Max showed no sign of nervousness by Wednesday afternoon.

“It’s better than I expected,” he said, adding that he was pleased with the turnout. While he said it worked out to bring the cooked food in from the churches, it would be better if they could use the MHS cafeteria’s kitchen next year.

For a first-time event, “we can only go up from here,” he said.

Rothrock said like any event, it likely will improve as it continues. But “it went as smooth as I ever imagined trying to serve over 1,000 people. Everyone did an outstanding job, No one was afraid to work and work hard,” said Rothrock, who also delivered meals during the afternoon.

She said people who ate dinner at the school told her the food was delicious and the meal was appreciated. The event was open to everyone, without charge.

“The community came together to do something meaningful”, she added.

Many of the youth who volunteered at the dinner said they were there to give back to the community, as Magna Vista High School student Allison Lockridge put it. She agreed when her schoolmate Hailey Rowe, who said it was “eye-opening” to see some of the people who came in for a meal.

Lockridge, Rowe and their schoolmates Emily Hale and Diana Winn also said they enjoyed meeting young people from other schools and would volunteer at similar events in the future.

Student Jesus Reyes said the experience was both fun and work. He and Martinsville High School classmate Barry Broadnax packed cranberry sauce for the dinner, while their friend Antonio Frazier worked at the drink station starting at 9:30 a.m. Bryson Broadnax set tables.

Majen Collins of Bassett High School said she was there “to serve others who can’t afford their own Thanksgiving. … I love to get into the community and give back by serving others.” She packed desserts and cranberry sauce for the dinner.

Youth Board member Mariah Holland of Martinsville High School said she was “most definitely” surprised at the turnout for Wednesday’s dinner, which she attributed to advertising for the event. As she bagged meals to go, she said she felt a sense of accomplishment in staging the dinner.

Foster, of the Youth Board, observed that there were more teen volunteers than adults. She said that may have been because the dinner was organized by young people, and others wanted to be a part of it.

She also found lessons to be learned from it. For instance, Foster said, “we may have over prepared,” recruiting more volunteers than were needed at times and resulting in downtime for volunteers early in the day.

DeWitt House, senior program officer for The Harvest Foundation, said he thinks Youth Board members “learned that preparation, dedication and commitment are all part of the recipe for success. We look forward to our debrief session so that we can improve for next year. The planning begins now.” 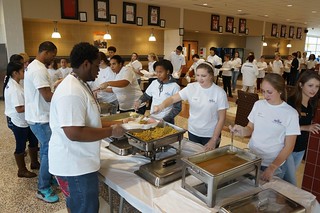 Carlisle student Nathan Ban said he learned something else from the dinner and Thanksgiving. Ban is from Korea, which has a similar holiday but it has a serious tone.

“We go to our ancestors’ tombs and share food with our ancestors’ ghosts. Here, it is more about family and happier,” he said, adding that he looks forward to returning home and telling his family about the American tradition.

Gracie Agnew, retired principal of Magna Vista High School and a mentor for a Youth Board member, was impressed with the number of young people who turned out on their day off to help. They were enthusiastic, mingling regardless of school and, for a change, not looking at their cell phones, she said.

Often when adults talk about young people, it is negative, Agnew said. But the youth at Wednesday’s dinner belied that.

“We have wonderful students who … are here because they want to be here,” she added.

And they were committed to putting on the event, even after they saw how much work was involved with the similar Richard’s Dinner, Agnew said. “I’m impressed because they knew the amount of work going into this and they still chose to undertake it. … They stuck with it.”

House thanked all the volunteers who helped make the dinner a success.

The quality of the youth and their efforts was not lost on those who enjoyed the meal, whether it was in the cafeteria or delivered to their home.

As she declared the food good, guest Nancy Wyatt praised the young people who organized and volunteered at the dinner. “They’ve done an excellent job,” she said.

Guests Barbara and Buford Ashby of Martinsville have volunteered at the community’s Christmas dinner since it started, so they went to the Thanksgiving Eve dinner to offer their help. When it wasn’t needed, they ate.

“It makes you feel good” to volunteer with events such as this, Buford Ashby said.

“It’s surprising there are as many young people” helping, he said. “They’ve got to take over for you and I” someday, quipped his wife, who volunteers at the Community Storehouse.

Ada Carter of Martinsville ate in the cafeteria because she likes to talk with people. She also came for her favorite — mashed potatoes, she said.

Carter said the young people who kept coming to her table to see if she needed anything were “sweet.” And she was not concerned about having a Thanksgiving meal on Thursday, the actual holiday. “Thanksgiving is every day of the year,” she said.

Linda and James Spear of Martinsville are retired and living on fixed income. “It helps on groceries,” Linda said, explaining why the couple takes advantage of several free meals in the community. “It’s nice that they do it.”

She asked one of the teens why she volunteered with the dinner, and the teen responded that the youth wanted to do the event themselves. “They are very nice, very mature,” Linda Spear added.

Rothrock also praised the youth involved with the dinner.

“Those youth are the future leaders of Martinsville and Henry County. There is no question in my mind they will be in really important leadership positions, and should be. They are capable of leading huge initiatives adults struggle with,” she said. “They can accomplish anything.

“I couldn’t be happier and so proud. … They should be proud of what they did,” Rothrock added.

“I’m real proud of this group. They are reaching out to the community,” he said, shortly before he pulled on plastic gloves to help in the serving line.

Talley called the dinner educational, a “life experience.” He noted that while students' test scores are important, it also is important to develop good citizens.

If everyone volunteered some time each week, “think of the impact it would have on people’s lives,” he added.