Foundation, Harvest Youth Board team up for Grace Network project

Members of the Harvest Youth Board present a $2,555 grant to Grace Network of Martinsville & Henry County.

The Harvest Foundation and Harvest Youth Board will partner on a project led by Grace Network of Martinsville & Henry County, Feeding Hope in MHC, to reduce food waste and further assist local families who are food insecure.

A $7,525 Pick Up the Pace! grant and a $2,555 Harvest Youth Board grant will be used to purchase refrigerators for schools in Martinsville and Henry County to save surplus, pre-packaged food provided by the USDA (United States Department of Agriculture) during breakfast and lunch. Although school systems allow students to take home extra food, a large portion still goes to waste.

“This grant is crucial because I see firsthand how much food is wasted on a daily basis,” said Finley Underwood, member of the youth board. “I volunteer at my church’s food bank and see how food truly is in demand. With this grant, we are able to store the surplus food instead of having to throw it away, which will better the quality of life in our area by providing food to those in need.”

An estimated 27,540 units of surplus food would be available annually, according to Henry County Public Schools. Community-based organizations, including Grace Network and the Salvation Army, will be responsible for collecting food from the local schools.

“Food insecurity is one of the most critical challenges we face here (in Martinsville-Henry County),” said Tracy Hinchcliff, executive director of Grace Network. “With this collaboration …, we can recover even more food that would otherwise be disposed of in our county and city schools and given to those who truly need it.”

Both school systems will provide food for this program as an in-kind contribution. Sheilah Williams, director of Clearview Early Childhood Center and school nutrition said she is excited about this project and hopes to make a difference by providing food items for this program.

This program is one more step toward eliminating food security, said Sandy Strayer, acting superintendent of Henry County Schools. “The opportunity to benefit families in our area is central to the vision of inspiring our learners to positively impact the world,” she added.

The United Way of Henry County and Martinsville will assist in the overall project design and implementation, while also evaluating the increase in available food for distribution, based on information in Charity Tracker.

Philip Wenkstern, executive director of United Way, said, “This program is a phenomenal opportunity that leverages surplus resources of the local school systems with the proven ability of the Salvation Army and Grace Network to address the needs of the food insecure population. It’s a win-win for all parties involved.”

The Harvest Youth Board considers grant proposals year-round for projects and programs that benefit youth in Martinsville-Henry County. The Harvest Foundation’s Pick Up the Pace! grants program is a competitive, small grants program designed to engage people and organizations in sparking innovative ideas, collaborations and change in Martinsville and Henry County. These six-month grants for up to $10,000 are available for application year-round. To find out more, visit www.theharvestfoundation.org or call (276) 632-3329. 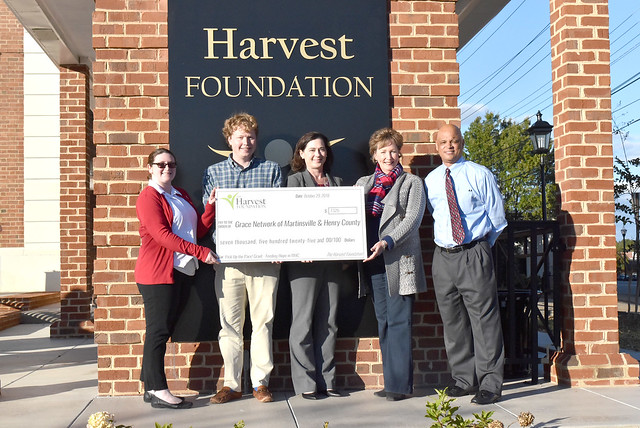