More than 50 students and their parents attended an informational session on the Harvest Youth Board on Monday, March 6 at the New College Institute.

Interest in serving on the Harvest Youth Board is far exceeding organizers’ expectations.

An informational meeting on Monday, March 6 attracted more than 50 students and their parents, nearly double the 30 people that the Harvest Youth Board had anticipated.

The meeting, held at the New College Institute, was the first of two designed to give information about the board to young people who are considering applying for membership and their parents. A second meeting will be held from 6 to 7 p.m. March 16, also at NCI. All area high school students who are rising sophomores, juniors and seniors in the fall and their parents are welcome.

Based just on Monday’s turnout, DeWitt House, senior program officer with The Harvest Foundation, said he anticipates double the number of applications for the seven board openings compared to last year. Then, 29 students applied for five open seats.

House added, “I was really pleased with the turnout, especially the number of parents that came with their children. I believe we have only scratched the surface regarding the potential of the youth board and its impact on this community. I’m encouraged by the energy and creativity board members are generating in the community. The potential for this organization is unlimited.”

This year, one rising high school senior, three rising juniors and three rising sophomores will be appointed, effective Aug. 1. Youth board membership is staggered by grade so turnover is held to a minimum each year. The longest any member may serve is three years; membership ends at high school graduation.

“I think it’s a great opportunity,” said Elli McGovern, a student at Martinsville High School who attended Monday’s meeting with her mother, Carol. Elli added that she expects competition will be tough for the board vacancies.

Elli said she was attracted to the youth board because its members make their own decisions, with interaction from The Harvest Foundation board and Kiwanis Club, which helps fund it. The experience teaches leadership, she said.

“If we stay, we will be the leaders” of the community in the future, she added.

Carol McGovern also said she thinks the board offers youth opportunities to become active in their community and serve as a role model.

Like several parents at the meeting, she was concerned about the amount of time board service requires. Her daughter, like many of the other students present, is involved in athletics year-round and was president of the MHS sophomore class.

But, Carol McGovern added, “She has a good head on her shoulders. She’ll figure out how to balance” her activities, a skill which she will need in college.

“If we stay, we will be the leaders” of the community in the future. - Elli McGovern

Current youth board members said the amount of time they spend on board business varies, but it adds up. The board meets one Saturday morning a month, and its committees sometimes meet more often or hold conference calls, said board Chairperson Max Pinkston, a student at Martinsville High School. Members talk often and spend several hours a week on board business when events such as the board’s Thanksgiving eve community dinner are being planned, he said.

Marce Foster, mother of board Vice Chairperson Karli Foster, said the time involved in board service was the main question parents asked her at Monday’s meeting.

“I tried to tell them it is a commitment … and that they need parental support,” she said. “We are big fans of the youth board” because it helps young people grow professionally and develop leadership skills. Her husband, Robert Foster, added that board members become more knowledgeable about the community, and “as a father, I want my child to be aware of the community.”

Karli Foster said it helps that board members get along well. “It’s like a big family,” she added.

Several students and parents in the crowd said they are interested in the youth board because of its service to the community and the opportunities it offers young people to develop leadership skills. Specifically, several mentioned the Thanksgiving eve dinner, which the youth board members planned and staged last fall. In all, 177 volunteers — mostly students — served 1,704 meals at that event.

The youth board also has provided grants to the QuickStart tennis program in area schools, the YMCA for children’s swimming lessons and the Smith River Sports Complex for improvements there. It held a trunk or treat Halloween giveaway and members volunteered at Richard’s Dinner at Christmas, among other activities.

Nicholas O’Der, a sophomore at Magna Vista High School, said he likes how the youth board helps the community, specifically with the Thanksgiving eve dinner. He is a student ambassador at Magna Vista, which provides leadership and represents the school at events, according to Nicholas and his father, Craig O’Der. He added that Nicholas likes meeting new people and wants to volunteer in the community.

“It’s great that they have a youth board,” the senior O’Der said. It gives young people “an opportunity to see what youth can do.”

Clark Givens, a freshman at Martinsville High School, said he is interested in the youth board because he likes to do things in the area, including the robotics team and his church. His mother, Yvonne Givens, said she was impressed by the youth board’s activities and the opportunities it gives young people. She is a little concerned about the amount of time and responsibility it requires, and “he wants to make sure he can handle it. They (young people) are so busy,” she added.

Synthia Spencer of Martinsville said her son, Shane Spencer, a sophomore at Martinsville High School, is interested in the youth board. She said she was impressed by the leadership opportunities the board provides, something all young people need.

Emily Bray, a freshman at Magna Vista High School, said she will apply for the board because of its opportunities to learn new things. At Magna Vista, she is active in the FFA, band and flag corps and is an officer in the Beta Club, but her mother, Connie Bray of Spencer, said she is not worried about the time involved in youth board service.

“I can see where it can help kids grow,” she added.

Some of the current board members agreed that they have learned leadership skills as well as public speaking and financial skills. They also cited increased knowledge of the community as another benefit. 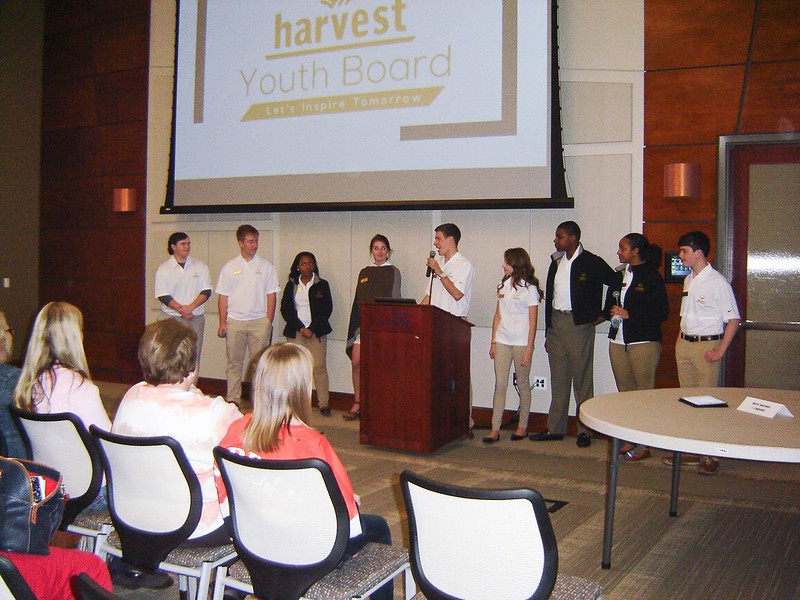 Max Pinkston Pinkston (with microphone), chairperson of the Harvest Youth Board, addresses an informational session on the board on Monday, March 6 at the New College Institute. He is flanked by other members of the 13-person board.

Applications for the seven board openings are due by April 1. They will be screened by former board members, who will recommend some for interviews. The 13-member youth board will pick each new member.

Last year, youth board members recruited applicants by manning lunch tables at area schools and talking with students, Karli Foster said. This year, post cards were sent to each area high school freshman, sophomore and junior inviting them and their parents to the meetings, according to Pinkston.

The new strategy was successful, House said Monday as he surveyed the meeting room where chairs were added to accommodate the larger-than-expected crowd.

Foster, who attends Bassett High School, agreed. With the new process, board members will be familiar with the applicants when they consider appointments in contrast with the “blind process” used last year, she said.

Youth board member Devin Page of Magna Vista High School said he will be looking for potential board members who are well-rounded and have a positive outlook, and who will be a good influence on the community.

At Monday’s meeting, four tables were set up in the corners of the room so board members could discuss their activities, the interview process and the application process with students and parents. At the fourth table, youth board members’ parents talked with other parents and answered questions.

After about 30 minutes, youth board members gave a presentation with more information on the board’s mission, activities, application process and other subjects.

Allyson Rothrock, president of the Harvest Foundation, said she was excited at the turnout for Monday’s event.

“The youth in our community are bright, engaged, and full of new and innovative ideas,” she said. “They love their community and are anxious to learn and contribute to the quality of life in Martinsville and Henry County. I though the event was overwhelmingly well-attended, and we are excited about the possibilities as we move forward.”

The Harvest Youth Board is entirely student-run and focuses on youth-related issues in the area. It can award grants, create initiatives or develop projects related to youth issues. Board members also serve in an advisory capacity to the full Harvest Foundation Board of Directors on youth and community issues.

The youth board, which is supported by Harvest and the Kiwanis Club, was formed in 2015.

For more information on The Harvest Foundation and the Harvest Youth Board, as well as an application for membership, visit www.theharvestfoundation.org. Applications are due April 1.